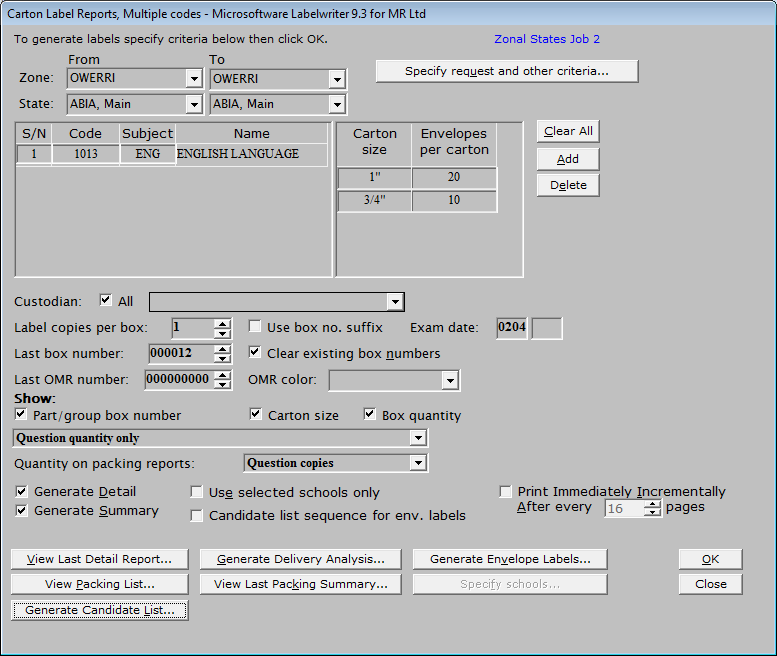 3032. A Printwiser client reported “Value too large” error for the PEF report, among other things. While doing some internal investigation we found one instance of this error during estimate calculation when quantity was 25 million, and fixed it, though it didn’t happen during PEF report generation for the given estimate.

3043. Visited Printwiser client to review press run impression calculation and sort out several other minor issues while investigation into the PEF issue could not be concluded. Investigation into the PEF issue continued back at the office and we found it was likely caused by the estimate to job conversion procedures that were triggered before the PEF report was generated.

3054. Continued the PEF investigation by importing an estimate that generated the error at the client site, into a local database. Generating the PEF with it hours later triggered the same “Value too large” error so we were able to locate the SQL procedure and within it the statement producing the error, implement a fix (changing data type for a variable from smallint to int) then email the database update script to the client.

3102. A MoneyBooks Payroll user that complained that loan balances didn’t appear on generated payslips visited for us to examine his database. Turned out the loan balances did appear on the payslips, only not at the particular spot the former EPPMS user was used to. Another Printwiser user called to request a visit as their Printwiser was reporting database connection error.

3113. Visited APSPS to investigate the Printwiser database connection error reported. The issue was found to have been caused by a corrupt log file and this was resolved.

3205. Visited Olukunle Ibiloye & Co to investigate a report of inability to send mail using Thunderbird from their domain email accounts. This was found to be on one laptop, SMTP outgoing server time-out errors being generated. The issue was resolved by reconfiguring the SMTP settings for the email accounts, correcting wrong server name in once instance and specifying “Connection security” value of SSL/TLS for all. The issue might have been caused by the use of Norton Security for firewall controls on the Windows 10 laptop. Furthermore, a request was received from another client for another version of the candidate listing report in Labelwriter.

3264. Successfully resolved the issue of the FN keys on a TOSHIBA Satellite laptop that stopped working earlier in the month. When the TOSHIBA Flash Cards Support Utility was first downloaded and installed as recommended here, the issue wasn’t solved. Going through the official TOSHIBA support steps here—up to the point of doing a power cycle of the laptop—also didn’t work. It was after we uninstalled the keyboard drivers and deleted the driver files via Device Manager—forcing new keyboard drivers to be installed automatically on restarting the system—that reinstalling the TFCSU again resolved the issue.

3286. We began work on the Labelwriter request, deciding placement of access to the new candidate listing report (shown in the image above) and designing the report format in PowerBuilder.

This month saw much time spent on provision of on-site and off-site technical support for our Printwiser, MoneyBooks and web application clients. The next upgrade of Labelwriter with a new candidate listing report was begun, while work was completed for a new domain name registration and hosting client, prior to full website development.
If you like this post please register or log in to be able to subscribe and be notified of new posts by admin.